Montreux Jazz kicked off a bit more than a week ago. The 52d edition is inaugurating a House of Jazz placed within the Petit Palais premises facing the entrance of Montreux Palace. I had the privilege to experience three massive pop-art performances by Charlotte Gainsbourg, Massive Attack and Etienne Daho. Before the Breton singer, there’s another gigantic name on the bill at the world famous Stravinski Hall, He is to step on the stage. Paolo Conte, a former notary in northern Italy. He brought over the decades the italian jazz to an international playground. I’d like to talk about that very respectable singer to begin with. He is a real maestro and Montreux Jazz Festival is home for him, like Leonard Cohen or David Bowie were when they were with us. 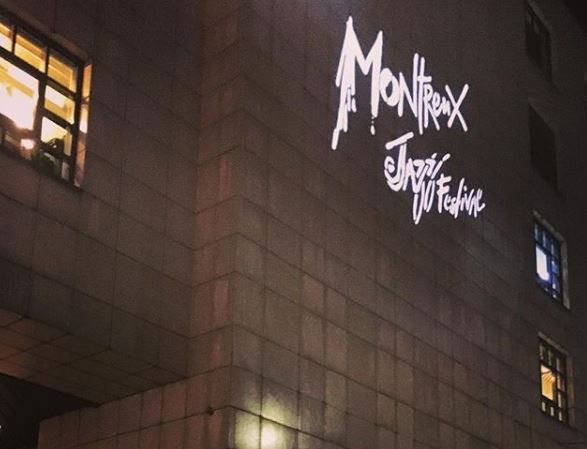 A light in night in the city of Montreux, the famous logo shines everywhere.

First keys hit on the piano and here’s a shock: « Azzurro » pops out and goes straight to my ears. It is genuine, straight forward, vibrant… patriotic in a very romantic way. This is indeed an hymn for Italians from all over the world, a sort of alternative « Fratelli d’Italia », that a large group of vocal italian-speaking members of the audience sing along with their heart out. Chills in the backbone and shivers all along the skin, that song reaches its goal, it is moving, comfortably reassuring, a « crowdpleaser ». The title was written by Vito Palavicini to go along with music made by Paolo Conte. 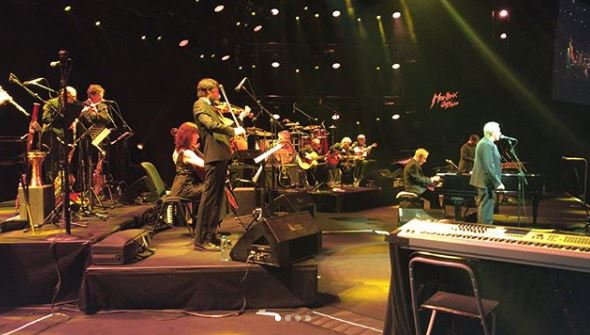 Paolo Conte, from the stage at the Stravinski Hall, courtesy of Paolo Conte official

In their professional generosity, the title will be actually popularized by a star of the Italian cantautori Adriano Celentano. Paolo Conte uses his piano skills, not only for the usic purpose, but also to set the tune of a warm summernight tale. His fingers walk his board on the white and black keys. The jazzman marks with his rocky voice every single piece of lyrics of his rich repertoire. That « jazz standard » written for Adriano Celentano is also his after all. We have the impression of a nice mix of Leonard Cohen, for the low voice, Serge Gainsbourg for the originality and Louis Armstrong for the pop dramaturgy of his jazz pieces.

The singer is very inspired by the gestures and the performances of his musicians on stage. The accordionist moves his two hands like a ballet dancer would move his legs gently first, then with some kind of sudden madness, as if a tango competition was taking place in a crowded milonga from Buenos Aires. Conte worships his musicians and pushes forward every little shot of happiness, clouds of lightness, drops of rhythms to storm into a song, meaning to massage the eardrum in the mist of trumpet sound waves… Conte is the mastermind of a plot where something special always happens. The magnetic Piedmontese octogenarian is here for the show and also for a communion with both his fellow musicians and his audience. A sort of pope of emo-jazz, a melting-pop conductor, a « gentile » speaker of very few words coming out of his deeply low mouth in between songs. The overflowing respect of the demanding mentor transpires all over.

« Via con me » is being played, the famous « It’s wonderful… », another moment of fusion in awe, while the audience asks for more (for one of the greatest standards « Un Gelato Al Limon » many times, for instance). The classical guitarist that is in charge of multiple soli is ecstatic. He trips on a very catchy riff while the crazy violinist seems to reach the nirvana. It is a music night, it is the opening night of Montreux Jazz Festival and Daho is on deck. The once pop superstar of the French charts came back last year with a brilliant new electro-rock LP called « Blitz » but we’ll talk about it a bit later. Let us move on to the most spectacular drummer in sight Monday night. Charlotte Gainsbourg’s drumbanger sets the tempo and it is magic. 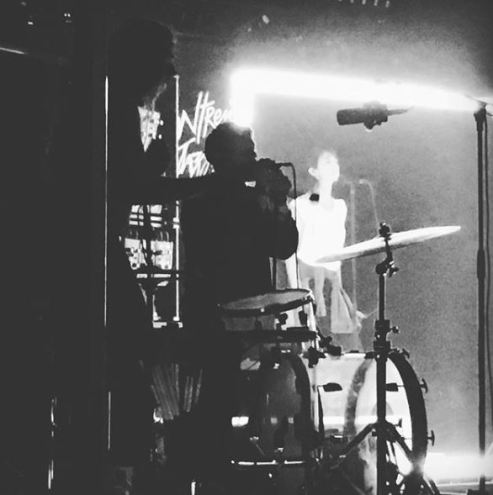 Drummer in the dark, using his sticks to beat the drum as a metronome, well done!

This is the moment at the Montreux Jazz Lab, last Monday night, that Charlotte Gainsbourg shows that she is really moved. She starts « Charlotte Forever » as a tribute to her highly admired father. Serge is here with us with that song being played. She also goes on with a very pure and ethereal hommage to her sister Kate Barry who died in 2013, a song that was written fir « Rest », her latest album. Plunging the audience into an early-night nostalgia for the past and delivering a pleasant and sweet snapshot of the present. An hour with Charlotte is precious, a sort of musical romance that comes and goes with a selection of inventive songs inviting electro beats, sepulchral vocals, fragile chorus close to the bone, a sophisticated machinery. 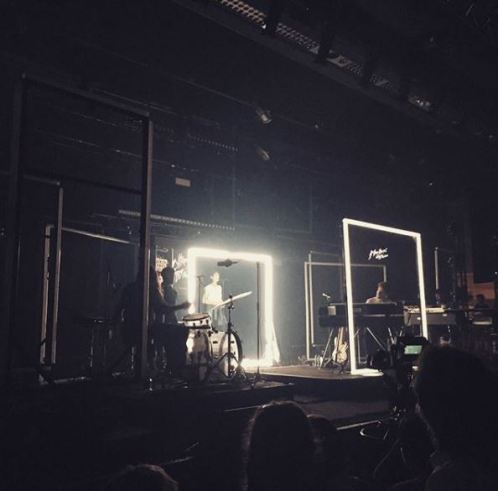 The group around Charlotte brings an orchestral grandeur to the very intimate lyrics in both French and English, gathered in his latest LP co-written and produced with electro french-touch reference SebastiAn, with the help of guests like Guy-Manuel de Homem Christo from Daft Punk, Dangermouse, Connan Mockasin, Paul McCartney or the poet Sylvia Plath. The visual part of the show with large neon back and white frames (something that Charlotte shares with her once duo partner Daho) strikes the eyes as if it was a stroboscobic night in a mininal techno club somewhere in an old Berlin neighborhood in the 1990’s. I loved the set and I loved the light show, a bit like I did for Etienne Daho three nights prior. 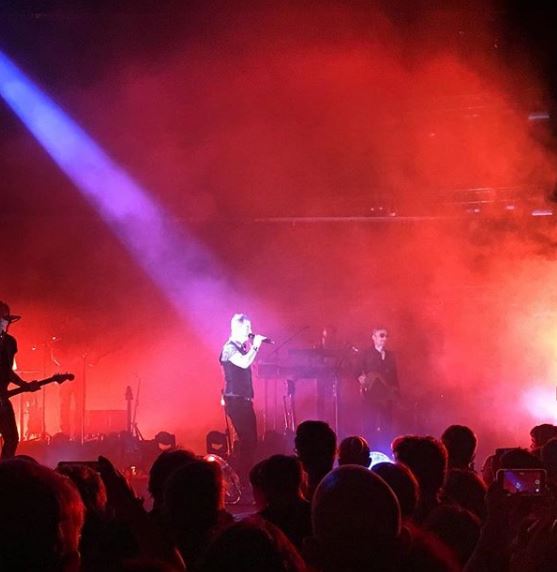 Daho, stealing the show with new songs from his rockier than ever LP « Blitz »

The pop veteran Daho shares with Charlotte Gainsbourg more than a futuristic decorum on stage. He also managed to transform « Bleu comme toi », « Week-end à Rome » into all new gigantic electro-rock pieces, helped in that respect by long-time music-production partner Jean-Louis Pierot (from the French pop duet Les Valentins) who knows Etienne’s dreams by heart. They also share the same sensation when it comes to propel a certain idea of France on a much anglosaxon background. Daho is very much indeed a british influenced rock n’pop French representative. Rennes, his hometown is also the capital city of indie pop music in France. And there is a whole new cycle of old-timers of the Rennes’ rock scene reuniting these days, Daho with his fans to begin with and Marquis de Sade, a band that will be on tour these coming months to the pleasure of many fans who were left to wait alone with weaker projects from the members of the band somewhere between 1981 and 2017. Maybe one day, Niagara will come out of the darkness too, who knows?

Daho, let’s talk about this man, always very generous, warm in his relationship with his fans, also warm with that very peculiar voice that seemed barely upfront in old records. Production from back in the days did not know the old emphasized sound of a voice take « à la Abbey Road ». With the years passing, Daho learnt how to play with his natural organ. It completely changed for an all-over-the-place « low » way of singing, something really touching as Daho is happy to hold the microphone to take over his shyness. Nothing is tamed in his live show, his new approach is much noisier, in your face. The voice is compressed by the technological means, the guitars are struggling with one aim: to reach a form of wall of sound, Smoke, lights, everything is here to impress the guests. The melodies of the 1980’s are rejuvenated, the recent hits like « Le Premier Jour » are rougher and groovier. Daho renewed himself and seems fighting fit to fill up big arenas. Some Johnny Halliday’s fans that I know were here, convinced. For them, Daho succeeded in galvanizing Montreux.

Daho, music partner Jean-Louis Pierot in white shirt and the rest of the band

Last but not least, the wonderful comeback of Massive Attack struck me as a real epitomy of my Montreux experience in 2018. 3D (Robert Del Naja) and Daddy G (Grantley Evan Marshall) are still rolling around the world, more politically conscious than ever about their responsability as human beings, contradicting obscurantism with peaceful anthems that are still resonating as chants for unification of torn appart societies. « Safe From Harm », « Unfinished Sympathy », « Blue Lines », « Protection », « Karmacoma », « Angel », « Teardrop »… the list of songs that turned people’s ears’ on from all over the world remains impressive. The visual show projects news agencies feeds in French about the migrants or the populist crisis that hits Europe. The slogans about the world controlled by its population, the pictures of desperate people who left their villages to risk their lives across northern african places and the mediterrean sea push the audience to step out of their comfort zone and think. And as Phil Collins said in a song, « it ‘s another day in paradise for you and me » and it is another day safe from harm for the Montreux Jazz attendance. The British trip-hop moguls display an unselfish carreer helping the poorest and the most people at stake within their country and all around the world, Something that the Queen of England or the newcomers in the international political stage Salvini or Kurz would never do. Just for that, I want to say thank you, let me vote for you whenever you decide to found your own political party.